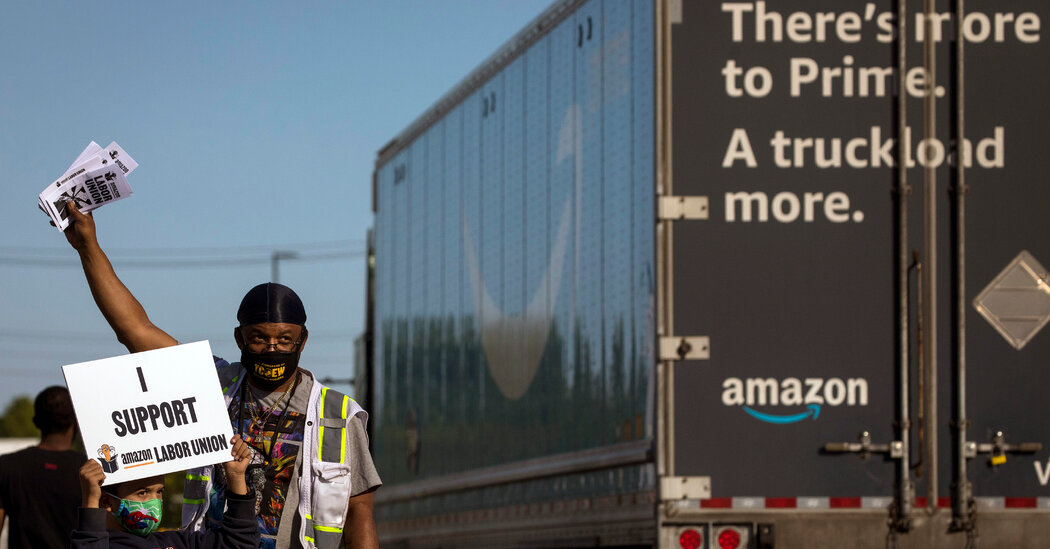 SEATTLE — Amazon, which faces mounting scrutiny over worker rights, agreed to let its warehouse employees more easily organize in the workplace as part of a nationwide settlement with the National Labor Relations Board this month.

Under the settlement, made final on Wednesday, Amazon said it would email past and current warehouse workers — likely more than one million people — with notifications of their rights and give them greater flexibility to organize in its buildings. The agreement also makes it easier and faster for the N.L.R.B., which investigates claims of unfair labor practices, to sue Amazon if it believes the company violated the terms.

Amazon has previously settled individual cases with the labor agency, but the new settlement’s national scope and its concessions to organizing go further than any previous agreement.

Because of Amazon’s sheer size — more than 750,000 people work in its operations in the United States alone — the agency said the settlement would reach one of the largest groups of workers in its history. The tech giant also agreed to terms that would let the N.L.R.B. bypass an administrative hearing process, a lengthy and cumbersome undertaking, if the agency found that the company had not abided by the settlement.

The agreement stemmed from six cases of Amazon workers who said the company limited their ability to organize colleagues. A copy was obtained by The New York Times.

It is a “big deal given the magnitude of the size of Amazon,” said Wilma B. Liebman, who was the chair of the N.L.R.B. under President Barack Obama.

Amazon, which has been on a hiring frenzy in the pandemic and is the nation’s second-largest private employer after Walmart, has faced increased labor pressure as its work force has soared to nearly 1.5 million globally. The company has become a leading example of a rising tide of worker organizing as the pandemic reshapes what employees expect from their employers.

This year, Amazon has grappled with organizing efforts at warehouses in Alabama and New York, and the International Brotherhood of Teamsters formally committed to support organizing at the company. Other companies, such as Starbucks, Kellogg and Deere & Company, have faced rising union activity as well.

Compounding the problem, Amazon is struggling to find enough employees to satiate its growth. The company was built on a model of high-turnover employment, which has now crashed into a phenomenon known as the Great Resignation, with workers in many industries quitting their jobs in search of a better deal for themselves.

Amazon has responded by raising wages and pledging to improve its workplace. It has said it would spend $4 billion to deal with labor shortages this quarter alone.

“This settlement agreement provides a crucial commitment from Amazon to millions of its workers across the United States that it will not interfere with their right to act collectively to improve their workplace by forming a union or taking other collective action,” Jennifer Abruzzo, the N.L.R.B.’s new general counsel appointed by President Biden, said in a statement on Thursday.

Amazon declined to comment. The company has said it supports workers’ rights to organize but believes employees are better served without a union.

Amazon and the labor agency have been in growing contact, and at times conflict. More than 75 cases alleging unfair labor practices have been brought against Amazon since the start of the pandemic, according to the N.L.R.B.’s database. Ms. Abruzzo has also issued several memos directing the agency’s staff to enforce labor laws against employers more aggressively.

Last month, the agency threw out the results of a failed, prominent union election at an Amazon warehouse in Alabama, saying the company had inappropriately interfered with the voting. The agency ordered another election. Amazon has not appealed the finding, though it can still do so.

Other employers, from beauty salons to retirement communities, have made nationwide settlements with the N.L.R.B. in the past when changing policies.

With the new settlement, Amazon agreed to change a policy that limited employee access to its facilities and notify employees that it had done so, as well as informing them of other labor rights. The settlement requires Amazon to post notices in all of its U.S. operations and on the employee app, called A to Z. Amazon must also email every person who has worked in its operations since March.

In past cases, Amazon explicitly said a settlement did not constitute an admission of wrongdoing. No similar language was included in the new settlement. In September, Ms. Abruzzo directed N.L.R.B. staff to accept these “non-admission clauses” only rarely.

The combination of terms, including the “unusual” commitment to email past and current employees, made Amazon’s settlement stand out, Ms. Liebman said, adding that other large employers were likely to take notice.

“It sends a signal that this general counsel is really serious about enforcing the law and what they will accept,” she said.

The six cases that led to Amazon’s settlement with the agency involved its workers in Chicago and Staten Island, N.Y. They had said Amazon prohibited them from being in areas like a break room or parking lot until within 15 minutes before or after their shifts, hampering any organizing.

One case was brought by Ted Miin, who works at an Amazon delivery station in Chicago. In an interview, Mr. Miin said a manager had told him, “It is more than 15 minutes past your shift, and you are not allowed to be here,” when he passed out newsletters at a protest in April.

“Co-workers were upset about being understaffed and overworked and staged a walkout,” he said, adding that a security guard also pressured him to leave the site while handing out leaflets.

In another case on Staten Island, Amazon threatened to call the police on an employee who handed out union literature on site, said Seth Goldstein, a lawyer who represents the company’s workers in Staten Island.

The right for workers to organize on-site during non-working time is well established, said Matthew Bodie, a former lawyer for the N.L.R.B. who teaches labor law at Saint Louis University.

“The fact that you can hang around and chat — that is prime, protected concerted activity periods, and the board has always been very protective of that,” he said.

Mr. Miin, who is part of an organizing group called Amazonians United Chicagoland, and other workers in Chicago reached a settlement with Amazon in the spring over the 15-minute rule at a different delivery station where they had worked last year. Two corporate employees also settled privately with Amazon in an agreement that included a nationwide notification of worker rights, but the agency does not police it.

Mr. Goldstein said he was “impressed” that the N.L.R.B. had pressed Amazon to agree to terms that would let the agency bypass its administrative hearing process, which happens before a judge and in which parties prepare arguments and present evidence, if it found the company had broken the agreement’s terms.

“They can get a court order to make Amazon obey federal labor law,” he said.

Eco-laundry hopes to clean up how we wash clothes