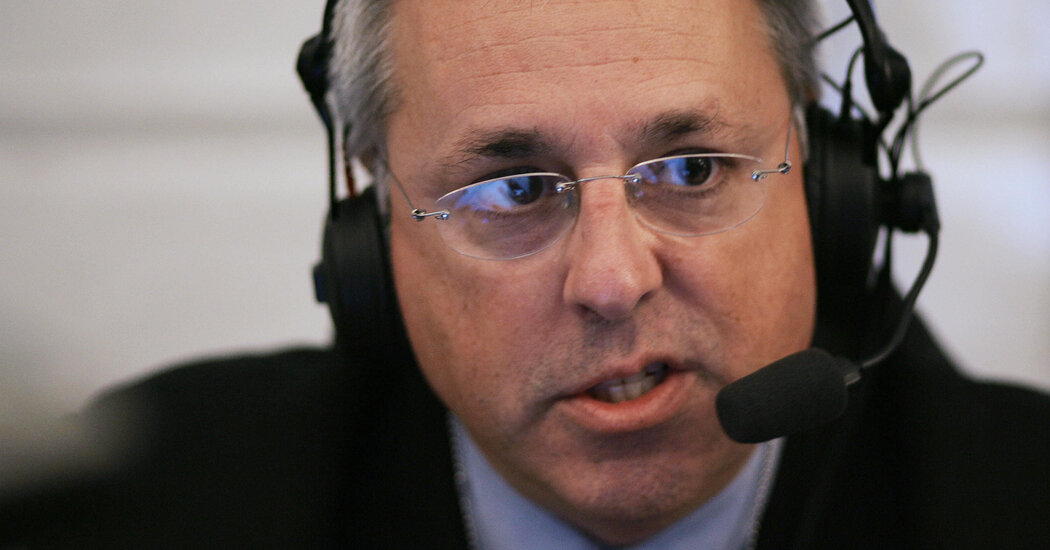 On a recent episode of his podcast, Rick Wiles, a pastor and self-described “citizen reporter,” endorsed a conspiracy theory: that Covid-19 vaccines were the product of a “global coup d’état by the most evil cabal of people in the history of mankind.”

“It’s an egg that hatches into a synthetic parasite and grows inside your body,” Mr. Wiles said on his Oct. 13 episode. “This is like a sci-fi nightmare, and it’s happening in front of us.”

Mr. Wiles belongs to a group of hosts who have made false or misleading statements about Covid-19 and effective treatments for it. Like many of them, he has access to much of his listening audience because his show appears on a platform provided by a large media corporation.

Mr. Wiles’s podcast is available through iHeart Media, an audio company based in San Antonio that says it reaches nine out of 10 Americans each month. Spotify and Apple are other major companies that provide significant audio platforms for hosts who have shared similar views with their listeners about Covid-19 and vaccination efforts, or have had guests on their shows who promoted such notions.

Scientific studies have shown that vaccines will protect people against the coronavirus for long periods and have significantly reduced the spread of Covid-19. As the global death toll related to Covid-19 exceeds five million — and at a time when more than 40 percent of Americans are not fully vaccinated — iHeart, Spotify, Apple and many smaller audio companies have done little to rein in what radio hosts and podcasters say about the virus and vaccination efforts.

“There’s really no curb on it,” said Jason Loviglio, an associate professor of media and communication studies at the University of Maryland, Baltimore County. “There’s no real mechanism to push back, other than advertisers boycotting and corporate executives saying we need a culture change.”

Asked about his false statements concerning Covid-19 vaccines, Mr. Wiles described pandemic mitigation efforts as “global communism.” “If the Needle Nazis win, freedom is over for generations, maybe forever,” he said in an email.

The reach of radio shows and podcasts is great, especially among young people: A recent survey from the National Research Group, a consulting firm, found that 60 percent of listeners under 40 get their news primarily through audio, a type of media they say they trust more than print or video.

Marc Bernier, a talk radio host in Daytona Beach, Fla., whose show is available for download or streaming on iHeart’s and Apple’s digital platforms, was among the talk radio hosts who died of Covid-19 complications after expressing anti-vaccination views on their programs. The deaths made national news and set off a cascade of commentary on social media. What drew less attention was the industry that helped give them an audience.

On a June episode, Mr. Bernier said, after referring to unvaccinated people: “I’m one of them. Judge me if you want.” The next month, he cited an unfounded claim that “45,000 people have died from taking the vaccine.” In his final Twitter post, on July 30, Mr. Bernier accused the government of “acting like Nazis” for encouraging Covid-19 vaccines.

Jimmy DeYoung Sr., whose program was available on iHeart, Apple and Spotify, died of Covid-19 complications after making his show a venue for false or misleading statements about vaccines. One of his frequent guests was Sam Rohrer, a former Pennsylvania state representative who likened the promotion of Covid-19 vaccines to Nazi tactics and made a sweeping false statement. “This is not a vaccine, by definition,” Mr. Rohrer said on an April episode. “It is a permanent altering of my immune system, which God created to handle the kinds of things that are coming that way.” Mr. DeYoung thanked his guest for his “insight.” Mr. DeYoung died four months later.

Buck Sexton, the host of a program syndicated by Premiere Networks, an iHeart subsidiary, recently floated the theory that mass Covid-19 vaccinations could speed the virus’s mutation into more dangerous strains. He made this suggestion while appearing on another Premiere Networks program, “The Jesse Kelly Show.”

The theory appears to have its roots in a 2015 paper about vaccines for a chicken ailment called Marek’s disease. Its author, Andrew Read, a professor of biology and entomology at Penn State University, has said his research has been “misinterpreted” by anti-vaccine activists. He added that Covid-19 vaccines have been found to reduce transmissions substantially, whereas chickens inoculated with the Marek’s disease vaccine were still able to transmit the disease. Mr. Sexton did not reply to a request for comment.

“We’re seeing lots of public radio stations doing amazing local work to spread good health information,” Mr. Loviglio, the media professor, said. “On the other side, you’re seeing mostly the AM radio dial and their podcast counterparts being the Wild West of the airwaves.”

iHeart — which owns more than 860 radio stations, publishes more than 600 podcasts and operates a vast online archive of audio programs — has rules for the podcasters on its platform prohibiting them from making statements that incite hate, promote Nazi propaganda or are defamatory. It would not say whether it has a policy concerning false statements on Covid-19 or vaccination efforts.

Spotify, which says its podcast platform has 299 million monthly listeners, prohibits hate speech in its guidelines. In a response to inquiries, the company said in a written statement that it also prohibits content “that promotes dangerous false or dangerous deceptive content about Covid-19, which may cause offline harm and/or pose a direct threat to public health.” The company added that it had removed content that violated its policies. But the episode with Mr. DeYoung’s conversation with Mr. Rohrer was still available via Spotify.

Dawn Ostroff, Spotify’s content and advertising business officer, said at a conference last month that the company was making “very aggressive moves” to invest more in content moderation. “There’s a difference between the content that we make and the content that we license and the content that’s on the platform,” she said, “but our policies are the same no matter what type of content is on our platform. We will not allow any content that infringes or that in any way is inaccurate.”

The audio industry has not drawn the same scrutiny as large social media companies, whose executives have been questioned in congressional hearings about the platforms’ role in spreading false or misleading information.

The social media giants have made efforts over the last year to stop the flow of false reports related to the pandemic. In September, YouTube said it was banning the accounts of several prominent anti-vaccine activists. It also removes or de-emphasizes content it deems to be misinformation or close to it. Late last year, Twitter announced that it would remove posts and ads with false claims about coronavirus vaccines. Facebook followed suit in February, saying it would remove false claims about vaccines generally.

Sylvia Chan-Olmsted, a media professor at the University of Florida, said that podcasts may be more effective in spreading false information than social media. “People who go to podcasts have much more active engagement,” she said. “It’s not like, ‘Oh, I went on Facebook and I scrolled through and saw this misinformation.’ It’s more likely that you’re engaged, you’re interested in this host, you actively seek this person out and listen to what he or she has to say.”

Audio media has grown more popular during the pandemic, according to the iHeart chief executive Robert W. Pittman, a former head of MTV and AOL. At a recent media industry conference, he noted a change in listening habits over the last 20 months: “The consumer before the pandemic, because of social and a lot of other things, was feeling disconnected, and they value media that feels like a companion. There are two of those: radio, and now there’s podcasting.”

The F.C.C. is barred from violating American citizens’ right to free speech. When it takes action against a media company over programming, it is typically in response to complaints about content considered obscene or indecent, as when it fined a Virginia television station in 2015 for a newscast that included a segment on a pornographic film star.

In a statement, an F.C.C. spokesman said the agency “reviews all complaints and determines what is actionable under the Constitution and the law.” It added that the main responsibility for what goes on the air lies with radio station owners, saying that “broadcast licensees have a duty to act in the public interest.”

The world of talk radio and podcasting is huge, and anti-vaccine sentiment is a small part of it. iHeart offers an educational podcast series about Covid-19 vaccines, and Spotify created a hub for podcasts about Covid-19 from news outlets including ABC and Bloomberg.

There has been at least one turnaround among hosts once skeptical of the pandemic and efforts to counter it. Bill Cunningham, who has a radio show in Cincinnati that is syndicated by iHeart’s Premiere Networks and available on Apple, spent the early part of the pandemic claiming that Covid-19 was overhyped. He revised his view on the air this year, describing his decision to get vaccinated and encouraging his listeners to do the same.

Recently, he expressed his eagerness to get a booster shot and mentioned that he had picked up a new nickname: “The Vaxxinator.”

Shang-Chi, Red Notice, and every new movie you can stream at home this weekend