In the past couple of years, we’ve seen a growing trend of creators adopting digital and social media, not just as a supplement to their media presence but also as a cornerstone of their personal brand.

The pandemic has surely accelerated creator economy trends. Many popular artists and figures have had to postpone concerts and live events, subsequently using social media to carry out these activities and engage their fans. Proliferating through Western and far East markets, the creator economy bug, which has made platforms like Cameo and Patreon unicorns, is beginning to take center stage in MENA.

Today, Minly, an Egypt-based creator economy platform, is announcing that it has closed a $3.6 million seed round to allow stars across the MENA region to create authentic, personalized connections with their fans.

The round, which Minly says was oversubscribed, was co-led by 4DX Ventures, B&Y Venture Partners and Global Ventures. It also included participation from unnamed regional funds and angel investors like Scooter Braun, founder of SB Projects, and Jason Finger, co-founder of Seamless and GrubHub.

Experts say time spent viewing social media surpassed time spent viewing TV within the MENA region. But one shortcoming with social media is that its content often feels mass-produced. When creators make posts, it’s most times void of personalization. In a way, this dilutes the fan experience and limits the extent and number of ways the creator can monetize.

This is where Minly, founded last year by Mohamed El-Shinnawy, Tarek Hosny, Tarek ElGanainy, Ahmed Abbas, and Bassel El-Toukhy, comes in. It provides tools for creators to craft what it calls ‘authentic connections’ with their superfans and audience at scale. “In short, our goal is to eventually deliver tens of millions of unique, unforgettable experiences to fans each year,” El-Shinnawy told TechCrunch.

Shinnawy, who brings more than 15 years of media and technology experience to the table, is the chief technology officer at Minly. He sold his first company, Emerge Technology, to a U.S.-based media company. He has also delivered work for Hollywood’s top studios, such as Sony Pictures, Universal, Disney, Fox and Warner Brothers, while playing a role in the global expansion of Apple TV+, Disney+, and Netflix to the MENA region. Minly has experienced rapid growth since launching late last year. It has more than 50,000 users and an impressive list of popular regional celebrities ranging from actors and athletes like Fifi Abdou and Mahmoud Trezeguet to musicians and internet influencers like Assala Nasri and Tamer Hosny.

On the platform, users can buy personalized video messages and shoutouts from these celebrities, and they, in turn, connect with their fans on a more personal level.

“We think that we have already differentiated ourselves from other creator economy platforms in the region. We do this by offering the best catalogue of stars and user experience. And our entire team is working hard to grow this gap even further,” said El-Shinnawy on the crop of celebrities Minly has onboarded to the platform.

Some of the instances where celebrities connected with their fans on Minly include when actress and dancer Fifi Abdou sent a personal message to one of her biggest fans who has Down syndrome and when Egyptian singer Tamer Hosny made a surprise appearance at two fans’ engagement party in March. 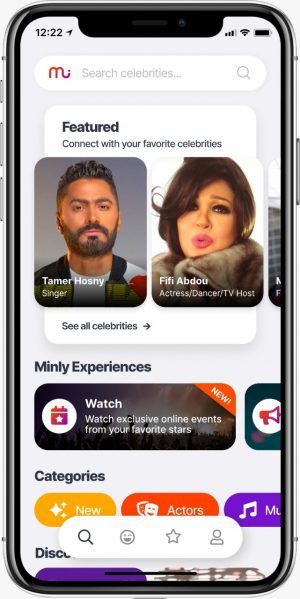 Minly takes a small commission on transactions made through its platform. However, the majority of the transaction price, a figure Minly didn’t disclose, goes directly to creators. And at the same time, Minly urges celebrities to automatically donate a portion of their earnings to partner charities on the platform.

Minly’s knack for creating a personalized experience is why Pan-African VC firm 4DX Ventures invested. The firm’s co-founder and general partner Peter Orth, who will be joining Minly’s board, said the company is fundamentally changing the relationship between celebrities and fans in the MENA region. “The team has both the ambition and the expertise to build a full-stack digital interaction platform that could change the way digital content is created and consumed in the region,” he added.

The creator economy market surpassed $100 billion in value this year and is still growing at an impressive rate. The pace of content creation will only speed up since surveys suggest that being a YouTuber or TikTokker or the most common term, vlogger, is one the most desirable careers among Gen Zs. VC heavyweights like Andreessen Horowitz, Kleiner Partners, and Tiger Global have also heralded this growth considerably, contributing to the more than $2 billion invested in creator economy platforms this year.

In MENA, there’s a huge opportunity for Minly. The region has over 450 million people, of which 30% are between the ages of 18 to 30. This demographic is known to have a deep connection with social media, and El-Shinnawy believes MENA will soon contribute to a large part of the total creator economy.

For Minly, the goal is to capture a huge portion of that spend and become a multibillion-dollar, category-leading company. The creator platform has a case to do so. As it stands, the opportunity to build a creator economy one-stop-shop in MENA is huge compared to other regions that already have multiple entrenched incumbents. Also, Minly is one of the few platforms in the region with meaningful venture funding.

“The creator economy is in its infancy and growing at lightning speed. We have the opportunity to build this category’s first unicorn in MENA,” the CTO remarked.

With this investment, Minly is doubling down on building local celebrity acquisition teams in Egypt and other parts across MENA and the GCC, where it has seen significant traction. The company will also scale its engineering team to churn out more products to build a horizontal creator platform.