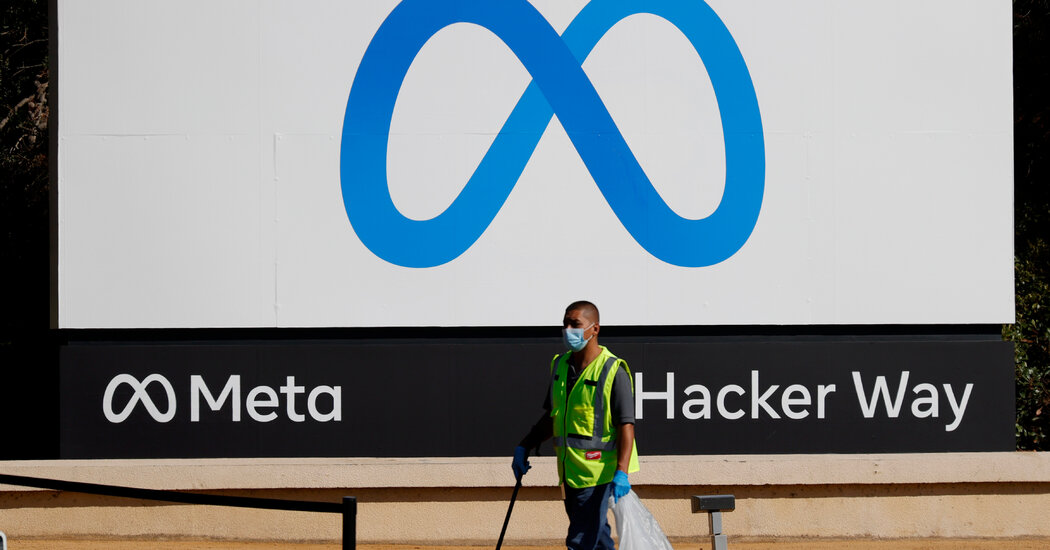 SAN FRANCISCO — Facebook rose to prominence over the past two decades with some of the world’s most recognizable branding: a big blue-and-white letter F.

No longer. On Thursday, the social networking giant took an unmistakable step toward an overhaul, de-emphasizing Facebook’s name and rebranding itself as Meta. The change was accompanied by a new corporate logo designed like an infinity-shaped symbol that was slightly askew. Facebook and its other apps, such as Instagram and WhatsApp, will remain but under the Meta umbrella.

The move punctuates how Mark Zuckerberg, the chief executive, plans to refocus his Silicon Valley company on what he sees as the next digital frontier, which is the unification of disparate digital worlds into something called the metaverse. At the same time, renaming Facebook may help distance the company from the social networking controversies it is facing, including how it is used to spread hate speech and misinformation.

“I’ve been thinking a lot about our identity” with this new chapter, Mr. Zuckerberg said, speaking at a virtual event on Thursday to showcase Facebook’s technological bets on the future. “Over time, I hope we’re seen as a metaverse company.”

With the change, Mr. Zuckerberg telegraphed that his company was going beyond today’s social networking, which Facebook has been built on since it was founded 17 years ago. Having Facebook as the corporate name when the company now owned many apps and was fundamentally about connecting people was no longer tenable, he said.

That was especially the case, Mr. Zuckerberg said, as Facebook has committed to building a composite universe melding online, virtual and augmented worlds that people can seamlessly traverse. He has said that this concept, known as the metaverse, can be the next major social platform and that several tech companies will build it over the next 10-plus years. On Monday, Facebook had signaled its intent to be a big player when it separated its virtual reality and augmented reality business into a division known as Facebook Reality Labs.

But evolving Facebook into a metaverse company will take time since the concept is theoretical and may take years to achieve. Facebook and its sister apps also remain a giant business, generating more than $86 billion in annual revenue and serving more than 3.5 billion people globally.

The timing of the name change has a double advantage. Facebook has grappled with some of the most intense scrutiny in its history in recent weeks. Lawmakers and the public have criticized its Instagram photo-sharing app for hurting some teenagers’ self-esteem and the company has faced questions for its role in amplifying misinformation and stirring unrest with inflammatory content.

The outcry reached a fever pitch after Frances Haugen, a former Facebook employee, leaked internal documents that showed how much the company knew about the harmful effects it was causing. Findings from Ms. Haugen’s documents were first published by The Wall Street Journal and then other media organizations, including The New York Times.

The revelations have led to a slew of congressional hearings, as well as legal and regulatory scrutiny. On Monday, Ms. Haugen spoke to British lawmakers in Parliament and urged them to regulate Facebook. On Tuesday, Facebook told its employees to “preserve internal documents and communications since 2016” that pertain to its businesses because governments and legislative bodies had started inquiries into its operations.

Corporate rebrands are rare but have precedent. They have generally been used to signal a company’s structural reorganization or to distance a company from a toxic reputation.

In 2015, Google restructured itself under a new parent company, Alphabet, dividing itself into separate companies to better differentiate its internet search business from the moonshot bets it was making in other areas. In 2011, Netflix announced plans to cleave its video business into two parts, briefly renaming its DVD-by-mail arm as Qwikster.

After The Verge reported last week that Facebook might change its name, social media erupted with less desirable comparisons. Some recalled how Philip Morris, the tobacco giant, rebranded itself to Altria Group in 2001 after years of reputational damage over the health costs and effects of cigarettes on the American public.

Facebook’s name change is largely cosmetic. It will begin trading under the stock ticker MVRS beginning on Dec. 1. The company will also rebrand some of its virtual-reality products as Meta, shifting away from the original brand name of Oculus.

The company was not restructured and no executive changes were announced. Mr. Zuckerberg also remains chief executive and chairman. He holds majority voting power over any changes that could affect the future of the company.

“No matter what Mark Zuckerberg calls it, it will remain Zuckerberg Inc. until he relinquishes some power and yields to functional corporate governance,” said Jennifer Grygiel, an associate professor and social media researcher at Syracuse University.

For months, Facebook has been building up to the metaverse announcement. Last year, it released its newest virtual-reality headsets, the Oculus Quest 2. In August, it unveiled virtual-reality service called Horizon Workrooms, a virtual meeting room where people using the virtual-reality headsets can gather as if they were at an in-person work meeting. And in September, it announced a new line of eyewear with Ray-Ban, which can record videos.

Those products are all pieces of the metaverse, which Mr. Zuckerberg acknowledged on Thursday sounded like “science fiction.”

Andrew Bosworth, Facebook’s chief technology officer, has also said the metaverse will need significant technological breakthroughs to happen and that the company was working on new versions of virtual reality and augmented reality hardware to make them smaller, less expensive and more immersive.

Even so, Mr. Zuckerberg on Thursday talked up the idea as “the successor to the mobile internet” and said mobile devices would no longer be the focal points. The building blocks for the metaverse were also already available, he said. In a demonstration, he showed a digital avatar of himself that transported to different digital worlds while talking to friends and family, no matter where they were on the planet.

“You’re really going to feel like you’re there with other people,” he said. “You’re not going to be locked into one world or platform.”

Mr. Zuckerberg said creating the metaverse would take work across different technology companies, new forms of governance and other elements that would not come in the short term. But he laid out several areas where the metaverse would be applicable, citing video gaming, fitness and work.

Mr. Zuckerberg showed Horizon Workrooms, a virtual conference room product, where colleagues could work together remotely on different projects that they might have once done at the office. He talked up several immersive video games. And he demonstrated Horizon Worlds, a virtual reality-based social network, where friends and family could come together and interact.

Success will depend partly on attracting others to create new apps and programs that work in the metaverse. As with the mobile app economy, users are more likely to join new computing ecosystems if there are programs and software for them to use.

As a result, Mr. Zuckerberg said he would continue offering low-cost or free services to developers and invest in attracting more developers through creator funds and other capital injections. Among other things, Facebook has earmarked $150 million for developers who create new kinds of immersive learning apps and programs.

“We are fully committed to this,” he said. “It is the next chapter of our work.”

How a Mistake by YouTube Shows Its Power Over Media