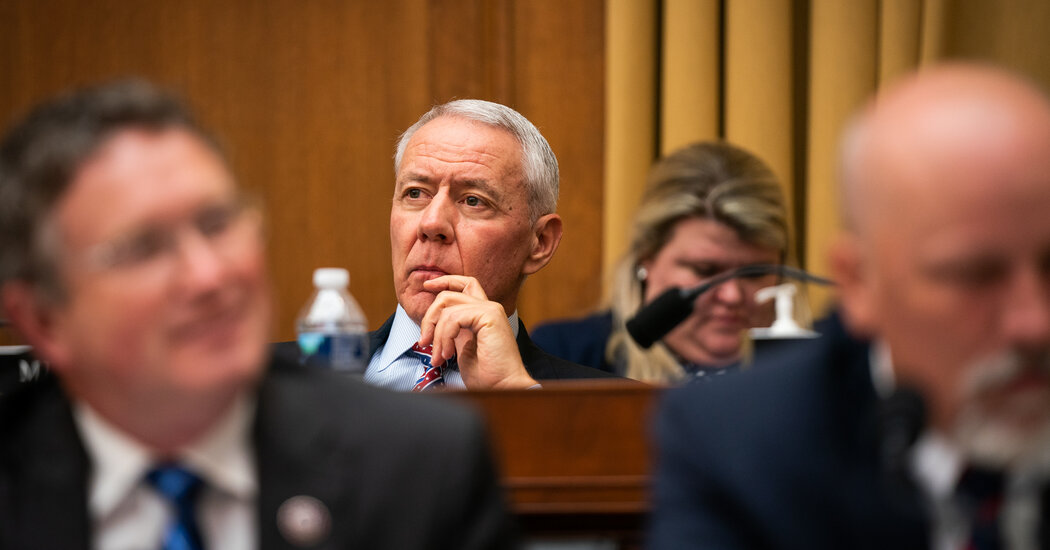 WASHINGTON — As the Defense Department prepares to solicit bids for cloud-computing work that could yield billions of dollars for Amazon, members of Congress are raising new questions about the company’s efforts to win a $10 billion contract during the Trump administration.

Previously unreleased emails show that Pentagon officials in 2017 and 2018 lavished praise on several of the tech executives whose companies expressed interest in the original contract, especially Amazon, while concerns about the company’s access appear to have been glossed over, according to the emails, other documents and interviews.

Two Republican lawmakers who have pushed to rein in the dominance of Amazon and other tech companies in consumer markets are seizing on the emails as evidence that Amazon unfairly used its influence in competing for taxpayer-funded contracts.

Representative Ken Buck of Colorado and Senator Mike Lee of Utah called for Amazon to testify under oath about “whether it tried to improperly influence the largest federal contract in history,” the $10 billion project called the Joint Enterprise Defense Infrastructure, or JEDI, that would move the Pentagon’s computer networks into the cloud. Amazon did not respond to requests for comment.

Whatever clout Amazon had in the Trump-era Pentagon had limited effect. And the company also had a very high-level antagonist: President Donald J. Trump, who while in office regularly assailed Amazon’s chief executive at the time, Jeff Bezos, the owner of The Washington Post. Amazon ultimately lost the JEDI contract, which was awarded to Microsoft in 2019, igniting questions about whether Mr. Trump’s hostility to Amazon played a role in the outcome.

But, in a victory for Amazon, the contract was canceled by the Pentagon this month amid a contentious legal battle over the award among Amazon, Microsoft and other tech companies. The Defense Department immediately announced that it was starting a revised cloud program that could yield contracts for Amazon, Microsoft and possibly other firms, setting off what is expected to be an intense lobbying fight.

The newly released emails and interviews with people familiar provide a glimpse into the evolving relationship between the Defense Department and the big technology companies at a time when the Pentagon is increasingly shifting its focus from planes, tanks and other hardware to software and initiatives involving artificial intelligence and machine learning.

They show how in the months leading up to the JEDI fight, top Pentagon officials and Silicon Valley executives engaged in an admiring courtship that led to high-level access for some of the firms that would later express interest in the contract. The tech executives used the access to urge Jim Mattis, Mr. Trump’s first defense secretary, to adopt cloud-based technology and, in at least one case, to promote their own company’s technology.

During a trip to the West Coast in the summer of 2017 to meet with executives from Apple, Amazon and Google, Mr. Mattis grew uncomfortable when he was subjected to a demonstration of Amazon’s cloud-computing products at the company’s Seattle headquarters during what he expected would be a more general discussion of cloud technology, according to documents and a former senior Pentagon official who is familiar with the meeting.

The former official said the demonstration was attended by Mr. Bezos, with whom Mr. Mattis had just met one on one, and a number of his lieutenants, and was led by an executive in charge of selling products from Amazon Web Services, or AWS, to governments.

Briefing materials prepared for Mr. Mattis before the meeting stated that “it will not be a sales pitch,” with “not” underlined for emphasis.

But immediately after the meeting, an aide to Mr. Mattis wrote in an email to another Pentagon official that the session “seemed to morph into an AWS sales pitch.” Mr. Mattis “was nice and gracious but I didn’t get a good vibe out of it,” the aide wrote, adding that the one-on-one session preceding the demonstration with Mr. Bezos “seemed to go very well” and that the Amazon founder and the defense secretary “did seem to click on a personal level.”

The competition for the JEDI contract quickly became bogged down in bitter squabbling. IBM protested the request for proposal, suggesting it favored Amazon, while Oracle alleged that Pentagon officials had conflicts of interest related to Amazon. When the contract went to Microsoft instead, Amazon sued to block it, arguing the Trump administration had interfered in the contracting process because of Mr. Trump’s enmity toward Mr. Bezos.

An investigation by the Defense Department’s inspector general dismissed the most serious allegations about Amazon and Pentagon officials improperly tilting the contracting process to the company.

In a report last year, the inspector general concluded that the outcome of the JEDI contract was not affected by either Mr. Trump’s attacks on Amazon or the connections between the company and the Defense Department.

But the report omitted the expressions of concern about the “sales pitch” demonstration for Mr. Mattis at Amazon headquarters, as well as language from an email exchange in which a Pentagon official told two close advisers to Mr. Mattis that the defense secretary’s chief of staff “defers” to them about whether to accept a request from Amazon for a meeting at the Pentagon between Mr. Bezos and Mr. Mattis.

One of the close advisers, Sally Donnelly, responded that Mr. Bezos “is the genius of our age, so why not.” Ms. Donnelly had worked in the Defense Department during the Obama administration before starting a consulting firm in 2012 where her clients included Amazon. That meeting does not appear to have taken place, and Ms. Donnelly later testified to the inspector general that she was being “flippant” and that Mr. Mattis’s chief of staff — not Ms. Donnelly — decided which meetings to take.

But less than two days after her email calling Mr. Bezos a genius, Ms. Donnelly followed up with a list of seven reasons Mr. Mattis should meet with him. It included that Amazon had hired “many” former U.S. government intelligence experts, that its cloud security “was so convincing” to the C.I.A. “that the agency two years ago took the surprising step of migrating the bulk of its secure work to Amazon,” and that Mr. Bezos’s ownership of The Washington Post gave him “influence beyond the business world.”

The inspector general’s office did not answer questions about the omissions of specific lines from the emails, or whether those omissions left an incomplete picture of the interactions between the Pentagon and Amazon.

“Our JEDI Cloud Procurement report speaks for itself — we stand by our findings and conclusions,” Dwrena K. Allen, a spokeswoman for the inspector general, said in a statement.

Michael N. Levy, a lawyer for Ms. Donnelly, said in a statement that she “always adhered to all ethical and legal obligations and acted in the best interest of the national security of the United States.”

Her efforts to broker meetings for Mr. Mattis and other tech executives were “part of the Department of Defense’s critical efforts to transform in the digital age,” Mr. Levy said.

The emails — which date from 2017 and 2018 — were released by the Defense Department’s inspector general in response to a Freedom of Information Act lawsuit brought by a former inspector general. The events described in them predate the formal Pentagon request for bids on the JEDI contract.

The emails show Mr. Mattis’s aides also lavishing praise on the chief executives of other companies.

Ms. Donnelly called Satya Nadella, the chief executive of Microsoft, “one of the sector’s ‘thought leaders’ and one of the country’s most prominent Indian Americans,” and indicated it was important for Mr. Mattis to meet with Mr. Nadella to demonstrate impartiality.

Another aide, whose name is redacted in the emails, wrote that Milo Medin, a Google executive with whom Mr. Mattis met during his 2017 trip to the West Coast, was “great.”

Mr. Mattis’s meeting with Tim Cook of Apple was “also solid,” the aide wrote, noting that the two men “seemed to click personally, Cook said he’s eager to help however he can (and seemed to mean it).” The aide concluded that “one positive note of the trip is that everyone” at the various companies “seemed to convey a sincere ‘patriotic’ tune. I think that might have surprised the Boss a bit.”

A month after the trip, the Pentagon issued a memo titled “Accelerating Enterprise Cloud Adoption.”

Mr. Buck, who worked on a bipartisan package of bills that passed the Judiciary Committee last month meant to weaken the dominance of Big Tech, joined with Mr. Lee in sending a letter to Mr. Bezos in May suggesting that Amazon tried “to monopolize one or more markets relating to government and/or commercial cloud computing services by improperly influencing the Joint Enterprise Defense Infrastructure procurement process.”

They called on the Justice Department to investigate whether Amazon “may have violated federal conflict of interest and antitrust laws.” And they accused the Defense Department’s inspector general of glossing over improprieties related to Amazon’s bid for the JEDI contract.