Now in Your Inbox: Political Misinformation 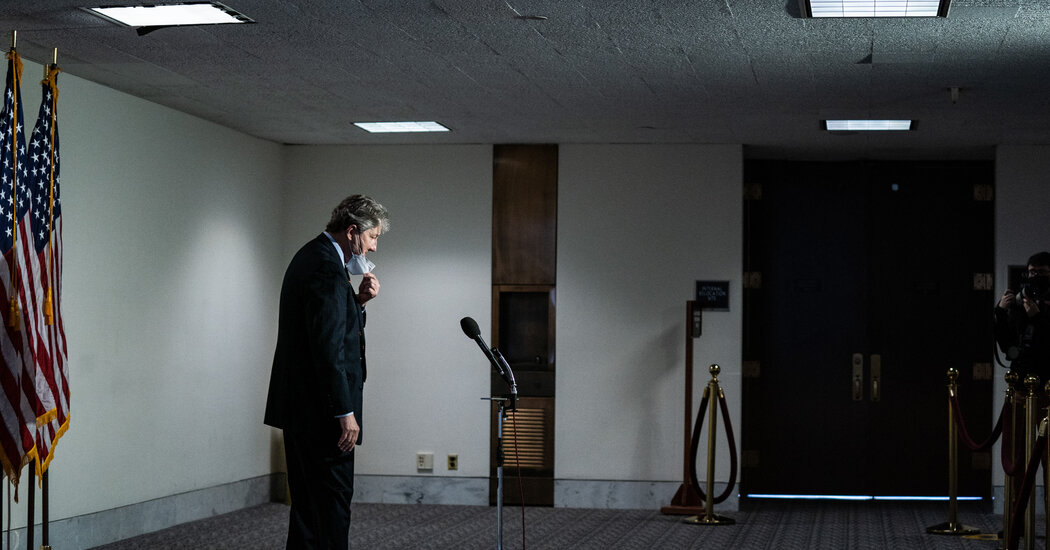 A few weeks ago, Representative Dan Crenshaw, a Texas Republican, falsely claimed that the centerpiece of President Biden’s domestic agenda, a $1.75 trillion bill to battle climate change and extend the nation’s social safety net, would include Medicare for all.

It doesn’t, and never has. But few noticed Mr. Crenshaw’s lie because he didn’t say it on Facebook, or on Fox News. Instead, he sent the false message directly to the inboxes of his constituents and supporters in a fund-raising email.

Lawmakers’ statements on social media and cable news are now routinely fact-checked and scrutinized. But email — one of the most powerful communication tools available to politicians, reaching up to hundreds of thousands of people — teems with unfounded claims and largely escapes notice.

The New York Times signed up in August for the campaign lists of the 390 senators and representatives running for re-election in 2022 whose websites offered that option, and read more than 2,500 emails from those campaigns to track how widely false and misleading statements were being used to help fill political coffers.

Both parties delivered heaps of hyperbole in their emails. One Republican, for instance, declared that Democrats wanted to establish a “one-party socialist state,” while a Democrat suggested that the party’s Jan. 6 inquiry was at imminent risk because the G.O.P. “could force the whole investigation to end early.”

But Republicans included misinformation far more often: in about 15 percent of their messages, compared with about 2 percent for Democrats. In addition, multiple Republicans often spread the same unfounded claims, whereas Democrats rarely repeated one another’s.

At least eight Republican lawmakers sent fund-raising emails containing a brazen distortion of a potential settlement with migrants separated from their families during the Trump administration. One of them, Senator John Kennedy, Republican of Louisiana, falsely claimed that President Biden was “giving every illegal immigrant that comes into our country $450,000.”

Those claims were grounded in news that the Justice Department was negotiating payments to settle lawsuits filed on behalf of immigrant families whom the Trump administration had separated, some of whom have not been reunited. But the payments, which are not final and could end up being smaller, would be limited to that small fraction of migrants.

The relatively small number of false statements from Democrats were mostly about abortion. For instance, an email from Representative Carolyn Maloney of New York said the Mississippi law before the Supreme Court was “nearly identical to the one in Texas, banning abortions after 6 weeks,” but Mississippi’s law bans abortion after 15 weeks and does not include the vigilante enforcement mechanism that is a defining characteristic of Texas’ law.

A spokeswoman for Ms. Maloney called the inaccuracy an “honest mistake” and said the campaign would check future emails more carefully.

Politicians have exaggerated and dissembled since time immemorial, including in their email dispatches. But the volume, the baldness and the reach of the false claims have increased.

The emails reviewed by The Times illuminate how ubiquitous misinformation has become among Republicans, fueled in large part by former President Donald J. Trump. And the misinformation is not coming only, or even primarily, from the handful who get national attention for it.

The people behind campaign emails have “realized the more extreme the claim, the better the response,” said Frank Luntz, a Republican pollster. “The more that it elicits red-hot anger, the more likely people donate. And it just contributes to the perversion of our democratic process. It contributes to the incivility and indecency of political behavior.”

The messages also underscore how, for all the efforts to compel platforms like Facebook and Twitter to address falsehoods, many of the same claims are flowing through other powerful channels with little notice.

For fact checkers and other watchdogs, “it’s hard to know what it is that politicians are saying directly to individual supporters in their inboxes,” said Jennifer Stromer-Galley, a professor in the School of Information Studies at Syracuse University.

“And politicians know that,” she said. “Politicians and the consulting firms behind them, they know that this kind of messaging is not monitored to the same extent, so they can be more carefree with what they’re saying.”

Email is a crucial tool in political fund-raising because it costs campaigns almost nothing and can be extremely effective: When campaigns invest in it, it routinely accounts for a majority of their online fund-raising. Supporters are bombarded — sometimes daily — with messages meant to make them angry, because strategists know anger motivates voters.

In many cases, candidates used anger-inducing misinformation directly in their requests for a donation. For instance, after his false claim about payments to immigrants, Mr. Kennedy — who began the email by declaring himself “mad as a murder hornet” — included a link labeled “RUSH $500 TO STOP ILLEGAL PAYMENTS!”

Several other Republicans, including Representative Vern Buchanan of Florida, also claimed that the payments would go to all undocumented immigrants. Others, including Senator Todd Young of Indiana, tucked the context inside emails with misleading subject lines such as “BREAKING: Biden wants to pay illegal immigrants $450,000 each for breaking our laws.”

Of 28 emails that included the $450,000 figure, only eight contextualized it accurately.

Campaign representatives for Mr. Buchanan and Mr. Young did not respond to requests for comment.

Another common line was that the Justice Department was targeting parents as “domestic terrorists” for challenging the teaching of critical race theory, an advanced academic framework that conservatives are using as shorthand for how some curriculums cover race and racism — or, alternatively, for challenging pandemic-related restrictions.

“Parents are simply protesting a radical curriculum in public schools, and Biden wants the parents labeled terrorists,” read an email from Representative Jake LaTurner of Kansas. “Will you consider donating now to help us fight back against this disgusting abuse of power?”

This misinformation — echoed in emails from Mr. Crenshaw, Mr. Kennedy, Mr. Young, Representative Jim Hagedorn of Minnesota and Representative Elise Stefanik of New York — emerged after Attorney General Merrick Garland sent a memorandum on Oct. 4 directing the F.B.I. to address threats against school personnel and school board members. (Some opponents of curriculums and pandemic protocols have sent death threats, vandalized homes and otherwise acted menacingly.) The memo explicitly distinguished between dissent and threats, and did not call anyone a domestic terrorist. The Republican narrative conflates it with a letter the National School Boards Association, an independent group, sent to the Justice Department a few days earlier.

Representatives for Ms. Stefanik and Mr. Hagedorn said the association had “coordinated” with the Biden administration on the letter, citing recent news reports. Those reports say the school boards association discussed the letter with the administration and, at the administration’s request, added details about the threats; they do not show the Justice Department endorsing the “terrorist” label or criminalizing nonviolent opposition to curriculums.

Campaign representatives for Mr. Crenshaw, Mr. Kennedy, Mr. LaTurner and Mr. Young did not respond to requests for comment.

Combating misinformation in emails is difficult both because of the private nature of the medium and because its targets are predisposed to believe it — though Emily Thorson, a political scientist at Syracuse, noted that the fact that the recipients were likely to already be staunch partisans reduced the chances of misinformation reaching people whose views would be changed by it.

Professor Thorson said what concerned her more was that — unlike much of the misinformation on social media — these claims came from people with authority and were being spread repetitively. That is how lies that the 2020 election was rigged gained traction: not “because of random videos on Facebook but because it was a coherent message echoed by a lot of elites,” she said. “Those are the ones that we need to be most worried about.”

“It may be a fund-raising pitch, but very often people look at it as a campaign pitch,” he said. “They think of it as context, they think of it as information — they don’t necessarily see this as fund-raising, even though that’s what it is. And so misleading them in an attempt to divide them from their money is pure evil, because you’re taking advantage of people who just don’t know the difference.”