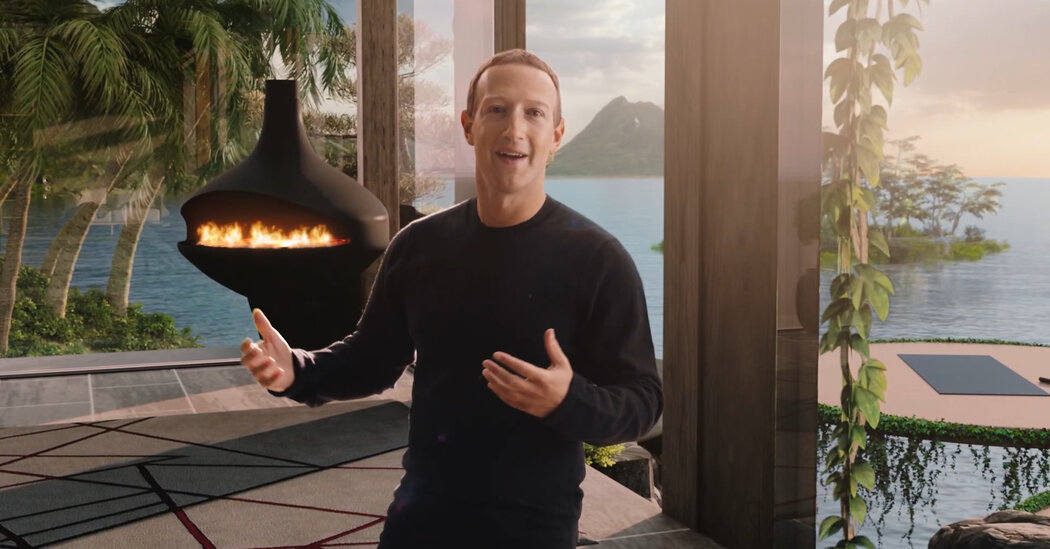 When Mark Zuckerberg appeared onscreen at Facebook’s virtual Connect conference on Thursday, smiling as he wandered through sterile rooms filled with midcentury modern furniture, he looked like a man unburdened.

Instead, Mr. Zuckerberg and his lieutenants cheerfully laid out their vision for the so-called metaverse, the immersive virtual environment that Facebook — which, as of Thursday, has been renamed Meta, although everyone except for a few professionally obligated financial journalists will probably keep calling it Facebook — is trying to build.

As with most of Facebook’s strategy announcements, Thursday’s rebranding formalized a shift that has been underway for years. The company already has more than 10,000 people working on augmented and virtual reality projects in its Reality Labs division — roughly twice as many people as are on Twitter’s entire staff — and has said it plans to hire 10,000 more in Europe soon. Earlier this week, the company announced that it would spend about $10 billion on metaverse-related investments this year, and it has been acquiring V.R. start-ups in what could amount to a metaverse land grab.

There are several types of questions one could ask about this metaverse strategy. The first and most basic is: What is a metaverse, and what will Facebook’s version of one look like?

That question was answered, at least partially, by Thursday’s presentation. Mr. Zuckerberg painted a picture of the metaverse as a clean, well-lit virtual world, entered with virtual and augmented reality hardware at first and more advanced body sensors later on, in which people can play virtual games, attend virtual concerts, go shopping for virtual goods, collect virtual art, hang out with each others’ virtual avatars and attend virtual work meetings.

This vision of an immersive digital realm is not new — it was sketched out almost 30 years ago by the science fiction author Neal Stephenson — but Mr. Zuckerberg is staking Facebook’s future on the bet that it will become real, saying that the metaverse will be a “successor to the mobile internet.”

Another obvious question you could ask is “Will this work?” It’s impossible to say for certain, of course, although personally, I’m skeptical that Facebook — a lumbering bureaucracy whose biggest breakthroughs in the past decade have mostly come by buying competing apps or copying their features, rather than developing its own ideas internally — will create an immersive digital universe that people actually want to spend time in.

But the most interesting question, to my mind, is: Why is Mr. Zuckerberg doing this? After all, it’s not a prelude to a huge corporate reorganization or a sign of a chief executive who wants to give himself an easier job, as was the case when Google renamed itself Alphabet in 2015 and Larry Page handed over day-to-day control of Google to Sundar Pichai. And even though some have speculated that the Meta rebranding is meant to distract from Facebook’s most recent round of scandals, it’s bizarre to think that announcing a radical plan to reinvent the digital world would make critics less skeptical of the company’s motives.

To understand why Mr. Zuckerberg is going all in, it helps to understand that a successful metaverse pivot could help solve at least four big, thorny problems Facebook faces here in the terrestrial world.

The first is one I’ve written about before, which is that Facebook’s core social media business is aging, and younger users are abandoning its apps in favor of TikTok, Snapchat and other, cooler apps. Facebook’s youth problem hasn’t hurt it financially yet, but ad revenue is a lagging indicator, and there is plenty of evidence that even Instagram — the supposedly healthy app in Facebook’s portfolio — is rapidly losing the attention of teenagers and twentysomethings.

The bleakest version of what Facebook might become in the next few years, if current trends hold — a Boomer-dominated sludge pit filled with cute animal videos and hyperpartisan garbage — is clearly not the kind of thing the company wants as its flagship product. (Mr. Zuckerberg explicitly endorsed a youth-focused strategy this week, saying that the company’s new focus was attracting and retaining young users.)

The metaverse could help with the company’s demographic crisis, if it encourages young people to strap on their Oculus headsets and hang out in Horizon — Facebook’s social V.R. app — instead of watching TikTok videos on their phones.

Another problem Facebook’s metaverse strategy could address, if it works, is platform risk. For years, Mr. Zuckerberg has been irked that because Facebook’s mobile apps run on iOS and Android, its success is highly dependent on Apple and Google, two companies whose priorities are often diametrically opposed to its own. This year’s “app tracking transparency” changes by Apple, for example, dealt a blow to Facebook’s advertising business by making it harder for the company to collect data about users’ mobile activity. And if smartphones remain the dominant way that people interact online, Facebook will never truly control its own destiny.

Mr. Zuckerberg has been talking about the strategic benefits of the metaverse since at least 2015, when he wrote to his lieutenants that “we need to succeed in building both a major platform and key apps to improve our strategic position on the next platform.”

A metaverse strategy, if it worked, could finally get Facebook out from under Apple’s and Google’s thumbs by steering users to Facebook-owned platforms like Oculus, where it doesn’t need to worry about getting kicked out of the app store for snooping on users’ activity or aiding the illegal trafficking of domestic workers. And it would mean that if Facebook wanted to charge for, say, virtual clothing inside one of its metaverse apps, it could do so without paying a 30 percent fee to a rival. (On Thursday, Mr. Zuckerberg obliquely criticized Apple and Google, saying their gatekeeping of the mobile app ecosystem was “stifling innovation, stopping people from building new things, and holding back the entire internet economy.”)

The third problem Facebook faces is regulatory risk. Facebook is not on the verge of being broken up, exactly, but regulators are making enough noise about restricting its growth (by establishing new privacy laws or preventing it from acquiring the next Instagram, for example) that it makes sense to place bets in some areas, like V.R. and A.R., that are less likely to be regulated any time soon. In addition, since so many of Facebook’s regulatory problems stem from the way its apps are used for fractious political debate, the metaverse could allow it to point to a kinder, gentler social universe that hasn’t yet been co-opted by angry partisans. (One group that conspicuously wasn’t pictured hanging out in the metaverse during Thursday’s presentation? Politicians.)

The fourth problem, of course, is the reputational damage Facebook has sustained as a result of its many missteps and scandals over the years. For years, anything Facebook does — even projects that have nothing to do with social networking, like introducing a cryptocurrency wallet — has been tainted by association. And given that dozens of media outlets are still poring through a year’s worth of damning internal research, the company’s public image is likely to get worse before it gets better.

Mr. Zuckerberg, whose new public persona is something like “above-it-all futurist,” professes not to have been motivated to rename Facebook by a desire to escape the company’s baggage. But Facebook’s toxic brand has had real consequences. It has demoralized the company’s work force and made it harder for Facebook to attract and retain talented employees. It has sunk partnerships, set advertisers on edge and turned Mr. Zuckerberg — who, despite his professed ambivalence, wants to be remembered as a visionary technologist rather than a destroyer of democracy — into a world-historic villain.

Building the metaverse won’t solve any of these problems overnight. It probably won’t solve them at all and could, in fact, invite new kinds of scrutiny that Facebook wouldn’t have faced if it had simply spent the next several years focusing all of its attention on fixing the issues with its existing products.

But it would be wrong to write Facebook’s metaverse off as just a marketing gimmick, or a strategic ploy meant to give the company more leverage over its rivals. (Although it is both.) If it works, Mr. Zuckerberg’s metaverse would usher in a new era of dominance — one that would extend Facebook’s influence to entirely new types of culture, communication and commerce. And if it doesn’t, it will be remembered as a desperate, costly attempt to give a futuristic face-lift to a geriatric social network while steering attention away from pressing societal problems. Either possibility is worth taking seriously.

Regardless, this isn’t a vanity stunt for Mr. Zuckerberg. In the metaverse, he has found what may be an escape hatch — a way to eject himself from Facebook’s messy, troubled present and break ground on a new, untainted frontier. No wonder he looks so happy.

What to watch this Halloween weekend